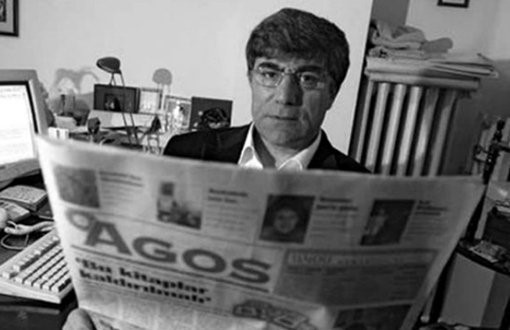 Hrant Dink Commemorated: It is Not Late to Be Ashamed

Editor-in-Chief of Agos newspaper Hrant Dink, who lost his life in an armed attack in front of what was then the building of Agos newspaper in Şişli, İstanbul on January 19, 2007, was commemorated at the time and place where he was assassinated today (January 19).

Before the commemoration ceremony started at 3 p.m., the street leading to the former office of Agos newspaper had been closed to traffic. The Governorship of İstanbul also announced that the Osmanbey Subway station near the commemoration site would be closed from 12 p.m. to 4.30 p.m.

People started gathering in front of the building as of 2 p.m. and chanted the slogans "Just to spite fascism, you are my brother Hrant" and "We are all Hrant, we are all Armenian."

The voice record of Hrant Dink, where he told the memory of "Water has found its crack", was also played during the commemoration.

Speaking at the commemoration ceremony, Sertaç Ekinci, the son of Yusuf Ekinci, who was killed in 1994, raised concerns over unidentified murders in Turkey. Referring to the social dimension of Hrant Dink's death, he underlined that so long as the rule of law was not established, justice would not be ensured in Turkey.

After the speech of Ekinci, Prof. Dr. Şebnem Korur-Fincancı from Hrant's Friends made the statement for the press of the 13th anniversary.

Some highlights from her speech were as follows:

'It is not hatred towards evil, but an endless struggle'

"Dear friends, the big and beautiful family of Ahparig Hrant, dearest Rakel Dink who dared to wholeheartedly question "the darkness that turns a baby into a murderer", his beautiful children who shouldered his struggle for rights and carried it into the future, his friends, our friends,

"Even hatred of humiliation distorts the features. Even anger against injustice makes the voice hoarse.", Brecht wrote in his poem. If we rage against the state power that has been hiding the well-known perpetrators for the past 13 years, if we cry out for injustices, would these count as getting coarse? After all, what makes the struggle for rights, if it is not the elegance of those who are oppressed due to their solidarity? Can we possibly find any coarse in the voices of hundreds of thousands who poured into the streets of Istanbul and chanted "We are all Hrant, we are all Armenian"?

"His friends, who have been fighting for Hrant, for justice in the last 13 years, have kept on reminding us all the value of the truth, despite the state power that banished the truth from these lands. The quest for justice is not coming to an end, it has never ended. Even if they drag along Saturday Mothers/People on the ground, even if they jail those that cry out the truth, even if they crack down on us to suppress us with crimes against humanity, we will not give up, as Hrant did never give up on speaking the truth. It is not our cause to nurture hatred towards the evil. Our cause is an infinite struggle. So that people do not get carried away with the banality of evil, and they continue their struggle for rights without bowing down to the power.

'Wounds of this land has never healed'

"For the wounds of these lands have never been healed. Let alone the healing of the wounds, every single day, we have to endure a state power that bleeds our wounds again and again. Just a couple of days ago, a Chaldean couple disappeared; father Aho of Syriac Mor Yakup [Saint Jacob] Monastery was detained. As if it was not enough to put them to the sword and drive into deserts, the state power has spared no effort to make sure that Armenians of Turkey will feel the restlessness of a dove every single day.
"Their streets were named Bozkurt and Ergenekon, their schools were named after Talat Pasha. The Genocide was the act of the Ottoman Empire, yet it was the Republic of Turkey that restored the honour of this legacy. We failed to live together; we failed to be a society that is multilingual and multicultural. What is worse, we do not even feel the shame for the drought we created. When the time came for the Kurds, the servants of the state bombed their homes with mortar shells, riddled them with holes, and then made graffities on the walls.

"As we failed to face and heal our wounds, each passing day, by inventing new others, our wounds have grown, new wounds have appeared. We have given our word to Hrant, it is our duty to know and heal our wounds. Tomorrow, when the time comes for us to face all that happened, there may appear these little Eichmanns who will try to normalize their evil acts by claiming that they only obeyed the instructions; even then it will not be too late to feel the shame. Still, we must get to know the evil and we must expose the evil-doers one by one. For Hrant, for justice!"