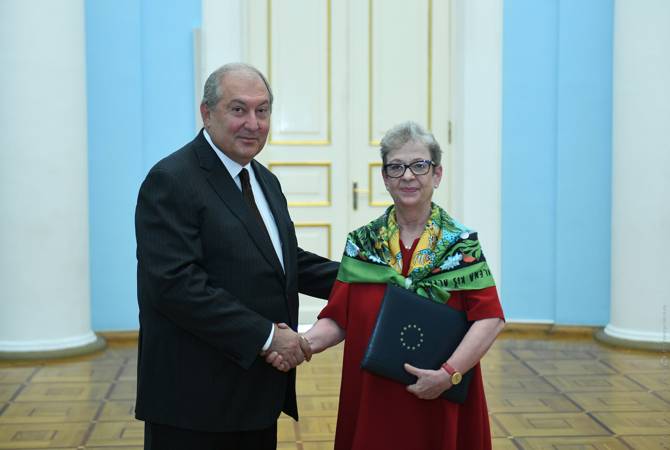 New Head of the EU Delegation to Armenia, Ambassador Andrea Wiktorin today presented her credentials to Armenian President Armen Sarkissian, the Presidential Office told Armenpress.
The EU Ambassador said it’s a great honor for her to return to Yerevan and to serve as an EU Ambassador (she served as German Ambassador to Armenia in 2007-2009).

President Sarkissian congratulated the Ambassador and in the person of her thanked the EU for the fundamental support provided to Armenia. “That support existed in the past, exists today, and I hope it will exist also in the future”, the President said.
Andrea Wiktorin said the EU is ready to support Armenia in the reforms process. “We are very happy that we have an agreement, a base and a roadmap which enables to implement it faster”, she said. The Ambassador said she has numerous ideas which she is going to implement during her tenure.
The sides also exchanged views on the Armenia-EU partnership agenda. President Sarkissian highlighted the comprehensive and enhanced partnership with the EU and its member states.

Edited and translated by Aneta Harutyunyan