A conference in the European Parliament launches a network of Armenian, Jewish, Roma and Assyrian diasporas 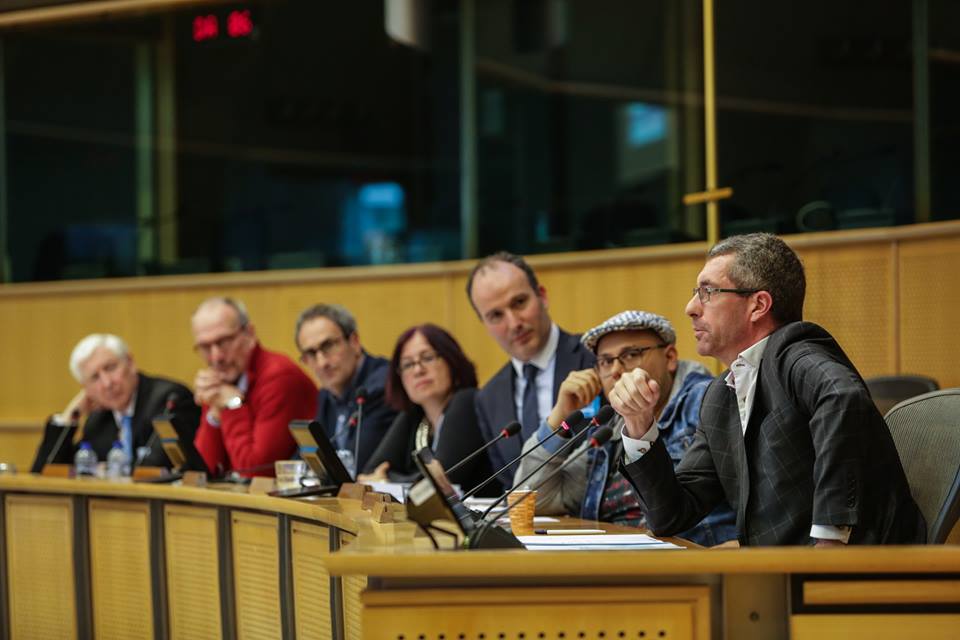 On Monday May 2 a coalition of Jewish, Armenian, Roma and Assyrian organizations launched a charter “For a Europe of Diasporas” at a conference in the European Parliament.

The document is a call for Europe to rediscover and value its diasporas.

To support the Charter for a Europe of Diasporas please click on the link:: https://docs.google.com/forms/d/1d-DDHNfoWy9Mp6tu_xIJjppuD3Uh5ccz-0_KkjZQ778/viewform

The document emphasizes that diasporas “are a product of Europe's history, [a] part of the European tapestry, have contributed to making European civilization what it is today and will continue in the future”. It defines diasporas as “transnational communities [that] share a common cultural heritage transmitted through generations.” Says Ismael Cortez of the UNESCO Institute of Philosophy: “many believe that there is an original European ethnic group. That is nationalist thinking. The perspective of the project “A Europe of Diasporas” is that Europe has always been a mosaic of peoples. […] My people, the Roma, are truly European as much as the rest."

Conference panels discussed two areas of concerns in particular: education and the need for “inclusive narratives”. The charter's call for “children affiliated with a diaspora [to] have an opportunity to learn of their background and heritage” was backed by the representative of the European Commission, Ms Kristina Cunningham: “we are arguing that schools today need to take the mother tongue of every child into account to support the development of children’s individual multilingualism.”

The panel on “inclusive narratives” addressed the effects of the near absence of diasporas in the narratives that shape people's understanding in the media, history teaching, the entertainment industry and public discourse. This theme also addressed the importance of remembrance of genocides and the toxic effects of their denial.

“We need wider recognition of the specificity of diasporas as a phenomenon. We need a very clear commitment on this”, said Vicente Rodriguez of TernYpe International Roma Network. Jordi Sebastia MEP, co-chair of the Parliament’s intergroup on National Minorities, Traditional Communities and Languages, believed it can and should be done: “it is possible to preserve the identity of [diasporas] and also to share common values about human rights and democracy in Europe, but we need to make the effort. ”

Says Nicolas Tavitian of the Armenian General Benevolent Union Europe: “people's identities have been instrumentalized for power, oppression and conflict. We urgently need a new ethic of diasporas. This is what the charter has to offer.”

The conference also featured the award ceremony of the photo competition “A Europe of Diasporas”. Andreea Tanase was announced as the winner of the competition for her photo “Holy Thursday”. The best 20 pictures of the competition selected by the professional jury members were exhibited in the Parliament during the conference. The exhibition - http://europeofdiasporas.eu/sites/default/files/project/files/Europe%20of%20Diasporas%20photo%20exhibition.pdf - illustrates the life and legacy of the Jewish, Armenian, Roma and Assyrian diasporas in Europe. It can be made available upon request.

The project also produced a map available online and a mobile application that display the heritage of diasporas in Europe.

About the project. "A Europe of Diasporas” is a network of diasporas in Europe. It aims to help affirm the notion that diasporas have been part of the European story for many centuries and that they are an asset for Europe. It promotes the idea that diaspora identities need not be tied to a territory or to a source of authority to be legitimate and valuable.

Phiren Amenca is a network of Roma and non-Roma volunteers and voluntary service organizations creating opportunities for non-formal education, dialogue and engagement, in order to challenge stereotypes and racism.

The European Union of Jewish Students is a pluralistic, inclusive and non-partisan umbrella organization that supports Jewish student unions throughout Europe and represents its members in international institutions and organizations.

AGBU Europe coordinates and develops the pan-European activities of the Armenian General Benevolent Union. Established in 1906, AGBU is the world’s largest non-profit Armenian organization. AGBU Europe runs numerous programmes in fields relating to academic research, the preservation and promotion of heritage, education and culture as well as awareness raising, advocacy and leadership training.