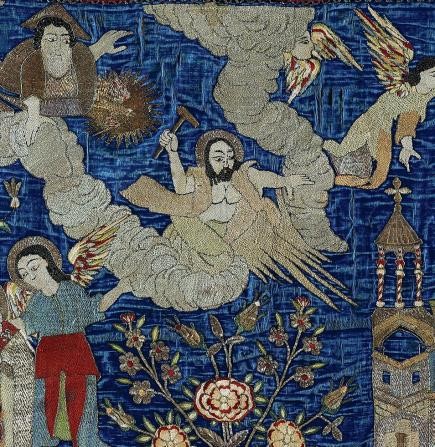 This is the first major exhibition to explore the remarkable artistic and cultural achievements of the Armenian people in a global context over fourteen centuries—from the fourth century, when the Armenians converted to Christianity in their homeland at the base of Mount Ararat, to the seventeenth century, when Armenian control of global trade routes first brought books printed in Armenian into the region.

Armenia! Opening September 22 at The Metropolitan Museum of Art, Armenia! explores the arts and culture of the Armenians from their conversion to Christianity in the early fourth century through their leading role on international trade routes in the 17th century.

The exhibition emphasizes how Armenians developed a distinctive national identity in their homeland at the base of Mt. Ararat (widely accepted as the resting place of Noah’s Ark) and how they maintained and transformed their traditions as their communities expanded across the globe.

More than 140 opulent gilded reliquaries, richly illuminated manuscripts, rare textiles, liturgical furnishings made of precious materials, khachkars (cross stones), church models, and printed books demonstrate Armenia’s distinctive imagery in their homeland and other major Armenian sites, from the Kingdom of Cilicia on the Mediterranean to New Julfa, in Safavid Persia.

Select comparative works display Armenian interaction with other cultures. Major Armenian repositories of their culture provide almost all the works in the exhibition. Most are on view in the United States for the first time; many have not traveled for centuries.

The exhibition is made possible by The Hagop Kevorkian Fund. Additional support is provided by the Carnegie Corporation of New York, the Armenian General Benevolent Union, The Giorgi Family Foundation, The Hirair and Anna Hovnanian Foundation, the Karagheusian Foundation, The Nazar and Artemis Nazarian Family, the Ruddock Foundation for the Arts, The Strauch Kulhanjian Family and The Paros Foundation, Aso O. Tavitian, and the National Endowment for the Arts. A

rmenia! focuses on major Armenian centers of production from their homeland west and east, with emphasis on images of Armenians, from self-portraits to depictions of male and female rulers, donors, theologians, and historians. Special attention is given to works by major artists such as T'oros Roslin, Sargis Pidzak, Toros Taronatsi, and Hakob of Julfa working in the Armenian homeland, the Kingdom of Cilicia, and New Julfa. More than half of the works on display are on loan from The Republic of Armenia with the support of The Ministry of Culture. Imposing liturgical works are coming from the Mother See of Holy Etchmiadzin, the primary site of the Armenian Church. In Yerevan, the “Matenadaran” Mesrop Masthots` Institute - Museum of Ancient Manuscripts is lending exceptional manuscripts, and the History Museum of Armenia is lending monumental church sculptures.

The Holy See of Cilicia in Lebanon, the Armenian Patriarchate of Jerusalem, and the Armenian Mekhitarist Congregation in Venice are the other major Armenian religious communities lending exceptional works. Armenian collections lending select works are the Calouste Gulbenkian Museum in Portugal and in America, the Diocese of the Armenian Church (Eastern) (New York); the Armenian Museum of America (Boston); and the Alex and Marie Manoogian Museum (Southfield, Michigan). Additional works are coming from The Met and other American and European institutions.

Photographs of Armenian architecture and landscapes by noted Armenian-Canadian photographer Hrair Hawk Khatcherian and his assistant Lilit Khachatryan will provide context for the works in the exhibition, in the catalogue, and on the exhibition page of the website.

Credits The exhibition was organized by Helen C. Evans, the Mary and Michael Jaharis Curator of Byzantine Art, with the support of C. Griffith Mann, the Michel David-Weill Curator in Charge, Department of Medieval Art and The Cloisters, assisted by Constance Alchermes, Research Assistant. Programs and Catalogue Education programs will include an international symposium, lectures, concerts, a website, a blog and group tours of the exhibition.

The symposium is made possible by The Armenian Center at Columbia University. Armenia! is accompanied by a lavishly illustrated catalogue suitable for the general public and specialists alike.

Published by The Metropolitan Museum of Art and distributed by Yale University Press, the book will be available in The Met Store ($65, hardcover). The catalogue is made possible by the Michel David-Weill Fund, The Andrew W. Mellon Foundation, the Dolores Zohrab Liebmann Fund, the Ruben Vardanyan and Veronika Zonabend Family Foundation, Joanne A. Peterson, The Tianaderrah Foundation, The Armenian Center at Columbia University, Elizabeth and Jean-Marie Eveillard, and Souran G. and Carol R.K. Ouzounian.